2019 Polls Will Be Free, Fair And Credible – Buhari Assures Theresa May 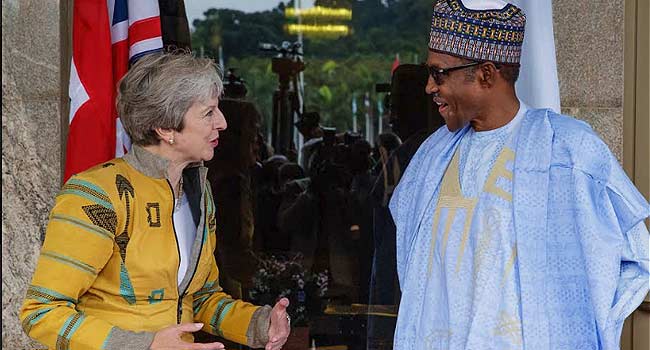 Nigeria’s president, Muhammadu Buhari  on Wednesday assured the British Prime Minister, Theresa May of his commitment towards conducting  free, fair and credible elections in 2019.

The President, who spoke during a bilateral meeting with May at the Presidential Villa, Abuja said he welcomes Britain’s support at strengthening democratic institutions in the country.

According to a statement issued by his Special Adviser on Media and Publicity, Femi Adesina, Buhari said the recent elections in Katsina, Bauchi, and Kogi states have  greatly boosted his morale.

“I assure you that I’m all out for free, fair and credible elections. I’m very pleased that my party is doing very well. The High Commissioner will brief you more.

“The recent successes in polls in Katsina, Bauchi, and Kogi have boosted our morale greatly. Nigeria has accepted multiparty democracy and that is putting politicians on their toes, forcing them to work harder,” Buhari said.

While applauding Britain’s support to Nigeria in fighting corruption, the president noted that the success of the anti-corruption crusade of his administration would mean a lot to ordinary Nigerians.

He added: “We had great opportunities and resources between 1999 and 2014, due to high oil prices. But when we came in 2015, oil prices plunged to as low as 37 dollars per barrel.

“What we have been doing since 2015 is to focus on infrastructure development, despite low earnings. Work is ongoing in roads, rail, power, and many others.”