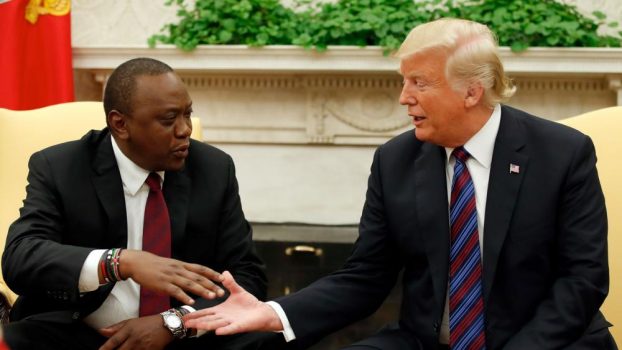 One thing seemed to have caught the attention of most Kenyans when the country’s president, Uhuru Kenyatta recently met with the President of the United States, Donald Trump in a first of its kind, one-on-one meeting.

Most Kenyans apparently perused the video footage of the meeting, especially their President’s eloquent and flawless English speaking skills.

In a viral video making rounds on social media especially Twitter, Uhuru can be heard speaking with an American accent which most Kenyans did not know he had.

A Kenyan journalist put it in a better perspective when he said “‘his little speech could easily soothe a baby to sleep especially when he effortlessly let out his Rs and Ts like an Mzungu (a person of European descent)”.

Of course most Kenyans felt their number one citizen was overdoing it and would have loved him to appear more natural even as one observed that after most Kenyans get on a plane, their accent magically changes.

However, others noted that Uhuru schooled overseas and his accent was in sync with the environment where he spent years acquiring his education.