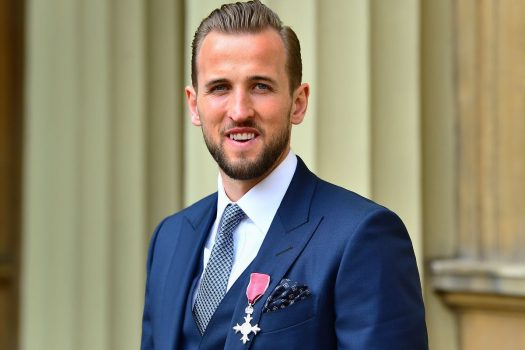 Tottenham Hotspurs and England captain, Harry Kane on Thursday received the honour of Member of the Order of the British Empire (MBE) from Prince William at Buckingham Palace following the exploits of the Three Lions at the 2018 World Cup in Russia.

The 25-year-old Kane was conferred with the honour by the Duke of Cambridge for his services to football and for being instrumental to England’s qualification to the semi-final stage at the Mundial, the first time since Italia 90.

He also won the Golden Boot in Russia after hitting six goals for the Gareth Southgate-tutored side, bringing the team close to reaching their first World Cup final since lifting the coveted trophy in 1966.

Although they were eventually knocked out by Croatia, courtesy of a Mario Mandzukic extra-time goal, they were still regarded as national heroes and Kane was credited for his efforts by being named in the Queen’s 2019 New Year Honours list.

Kane, who arrived at Buckingham Palace in London alongside his parents, Kim and Patrick as well as his partner, Kate Goodland was met by Prince William who pinned an MBE to his suit.

Kane has taken his World Cup form into the English Premier League this season with 17 goals, just one behind top scorer, Manchester City’s Sergio Aguero.

He has also taken his England tally to 22 goals in 37 games, with strikes against the Czech Republic and Montenegro in the European qualifiers last week.