Oba Of Benin Calls For Stiffer Sanctions For Human Traffickers 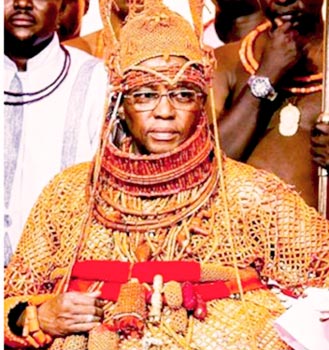 The Oba of Benin,  Ewuare II has called for tougher global sanctions on syndicates still involved in human trafficking across the world.

The monarch who made the call when he received the United States Charge d’ Affairs, David Young in his palace on Wednesday said there seems to be a high demand for trafficked persons in Europe, which he said has been responsible for the boom in the illegal business.

Oba Ewuare II called on the United States Agency for International Development (USAID) to step into the fight against human trafficking and the rehabilitation of victims of illegal migration.

The Oba also urged Mr. Young to support his call for the return of Benin artefacts which he  said  would be used to establish a Palace Museum in Benin Kingdom upon their repatriation.

Earlier in his speech, Young said his team was at the palace to appreciate and lend support to the monarch for his recent pronouncement against illegal migration and human trafficking.

He described human trafficking as the most horrific human rights violation all over the world, pointing out that the pronouncement by the Oba has had great impact in bringing freedom to the victims.

Young further said that all those involved in the crime must be brought to justice, adding that the American government had already adopted an approach of prevention, protection and prosecution in the fight against human trafficking.