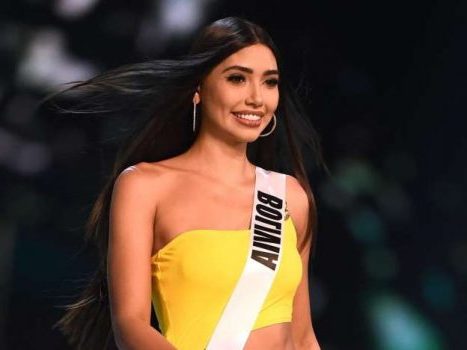 Model, Joyce Prado has been stripped of her Miss Santa Cruz and Miss Bolivia crowns days after she announced that she was pregnant.

Ms Prado who represented her country at the 2018 Miss Universe pageant in Bangkok, Thailand had over the weekend announced on Instagram that she and her model boyfriend, Rodrigo Giménez were expecting their first child together.

“I want to share with you that I am the happiest woman in the world because my life is full of love, because together with the man of my dreams we are beginning to live the most beautiful stage of our lives,” she wrote.

However, Promociones Gloria, the modeling agency which signed the 22-year-old Bravo announced on Facebook that she has been stripped of her most recent titles due to a ‘breach of contract’.

In the statement released by Promociones Gloria, it claimed to still maintain a cordial relationship with Ms Prado. The company did not explicitly state whether Prado’s pregnancy was the reason why her titles were removed.

Following the announcement, Promociones Gloria shared a clipping of a newspaper article on Instagram with the headline: ‘Joyce Prado is left without a crown because of her pregnancy’.

According to the Miss Universe website, contestants are not allowed to be pregnant or be married in order to compete. They must also remain unmarried throughout the period of their reign.