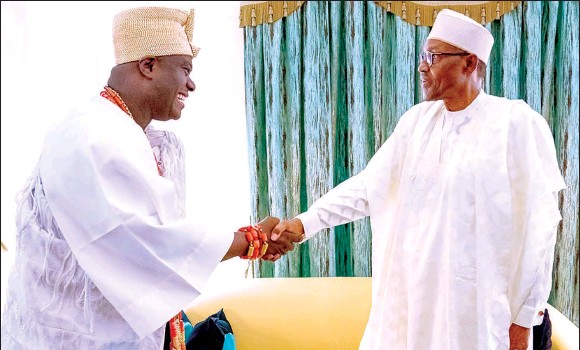 The Ooni of Ife, Oba Adeyeye Ogunwusi has raised the alarm over the security challenges in Nigeria, saying that the South-West region of the country does not want war.

Oba Ogunwusi, who made this known at a meeting with President Muhammadu Buhari at the statehouse on Thursday said he and other traditional rulers in the region were concerned as most of their rural communities have been taken over by strange people.

Speaking on behalf of other traditional leaders in the region, the Ooni noted that the security challenges in the south-western part of the country was real, calling for urgent intervention from security agencies.

While reiterating that the traditional leaders were worried and prepared to work with the government, Oba Ogunwusi called for  reinforcement of relevant federal apparatus to defend Nigerians from people he described as bad eggs and not necessarily Fulanis.

He further called on all those beating the drums of war as well as politicians escalating security issues to desist from such acts which he said were capable of causing anarchy as the nation cannot withstand a war.