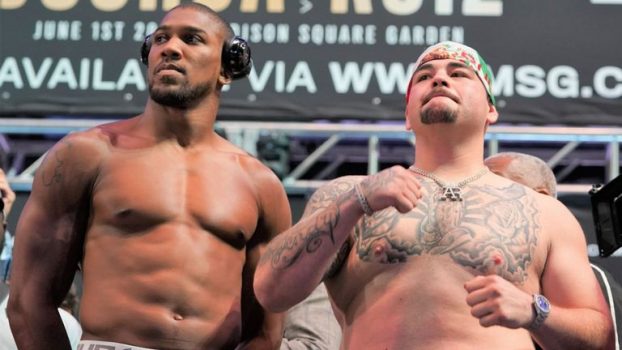 The much anticipated Anthony Joshua’s rematch with Andy Ruiz Jr. appears to be edging closer as promoter, Eddie Hearn says he is awaiting paperwork to be finalized, with Cardiff still the major option to stage the fight.

Hearn, The Matchroom Boxing boss has been considering plans for the world heavyweight title fight which is expected to be held in November or December after Ruiz Jr’s shock victory over Joshua in New York in June.

Ruiz Jr has voiced his displeasure at the prospect of facing Joshua in Cardiff but Hearn insists the Principality Stadium remains a likely location as he thrashes out details for the return bout.

“I know, I think where the fight is going but I just have to wait for some paperwork to be tied up and then we’ll make an announcement,” Hearn, who early this week said Joshua would have the final say on the venue told Sky Sports.

“Cardiff is still a major option. We have two or three other options around the world for neutral venues. Neutral venues would give us a lot less headache with Andy Ruiz but if it’s Wales, it’s Wales and that’s where the fight will be.

“But we’re just waiting for some paperwork to be tied up and then [Ruiz Jr] will be alerted as to where that venue is,” he added. Ruiz Jr has admitted his reluctance to fight in Britain

Hearn had suggested earlier in the week that Ruiz, the California-based Mexican  will not receive home advantage in a return bout.

“They don’t want to come to the UK, they never have done. Contractually, we know our position but we want to make sure we get the fight done. We want to respect Andy Ruiz but we’ll decide where the venue is.

“A neutral venue, he would be a lot happier with. I think I can rule out America right now. Cardiff is still the front runner, it’s still the favourite,” Hearn maintained.