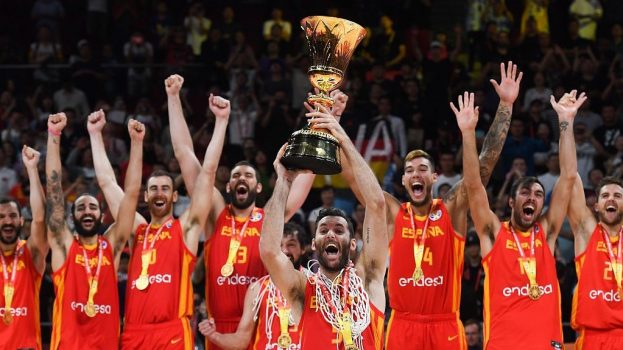 Spain won its second global title in men’s basketball  after defeating Argentina 95-75 in the FIBA World Cup final in China on Sunday.

The Spaniards, who were eliminated from gold-medal contention at the last four Olympics by the United States benefited from the Americans’ shock elimination from the tournament last week.

The US national basketball team finished seventh, its worst result ever in a major international tournament, after losses to France and Serbia.

Spain had its own challenge as its most influential player, Pau Gasol missed the World Cup due to a left foot surgery, with other veterans from the Olympic silver-medal  winning team like Jose Calderon and Juan Carlos Navarro moving on.

The Spanish team led by all-tournament players, Marc Gasol and Rubio played a turn-back-the-clock final against Argentina which has one player left from its Golden Generation, 39-year-old Luis Scola .

Both Scola and point guard, Facundo Campazzo were stymied into a combined 3-of-21 shooting by the Spaniards.

Spain will now go to the Tokyo Olympics seeking a first Olympic title after silver and bronze medals at the last three Games.

Earlier on Sunday, France beat Australia 67-59 in the third-place game, denying the Aussies their first Olympic or world medal.