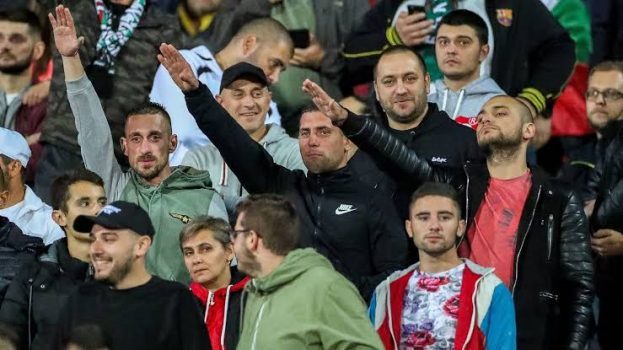 Four Bulgarian football fans have been detained after their game against the Three Lions of England on Monday night had to be stopped twice due to racist chants.

England players had monkey noises and Nazi salutes directed at them during the Euro 2020 qualifier in Sofia, the Bulgarian capital.

Confirming the arrests, the Bulgarian Ministry of Interior said the unnamed fans are being questioned by police over their involvement in racist behaviour during the qualifier which England comfortably won 6-0.

The ministry added that the Bulgarian Police are trying to track down more fans who participated in the racist chants, including monkey noises and Nazi salutes directed at England players.

European football governing body, UEFA had charged the Bulgarian Football Union (BFU) on Tuesday with four offences including racist behaviour, the throwing of objects on to the pitch of play and the disruption of the national anthem.

The English FA also had two charges brought against it. The charges were the disruption of the national anthem and the provision of an insufficient number of travelling stewards.

The fans’ detention came after police raided the headquarters of the Bulgarian Football Union, whose  president, Borislav Mihaylov resigned from his post after being ordered to do so by the country’s Prime Minister, Boyko Borissov.

Bulgaria has been heavily criticized over the conduct of home fans during the game, which was played in a partially closed stadium as punishment for racist chanting by fans during a match against Kosovo in June.

England manager, Gareth Southgate said he felt his players made a major statement on and off the pitch by refusing to let the racists win.

“Sadly, my players, because of their experiences in our own country are hardened to racism. I don’t know what that says about our society but that’s the reality.

“So that actually saddens me that when I speak to them about it, they are absolutely hardened to it. They also know they’ve made a statement and they want the focus to be on the football,” Southgate said.

Bulgarian captain, Ivelin Popov was seen remonstrating with home fans during half time but head coach, Krasimir Balakov claimed the conversation was more likely to be about his side’s poor display and that he had not heard any racist chants during the match.

“I was concentrated on the game. I didn’t actually hear anything but I just talked to the English press downstairs and I told them that if this is proven to be true, then we have to be ashamed and we have to apologize for it. But, once again, first it has to be proven to be true,” Balakov said.