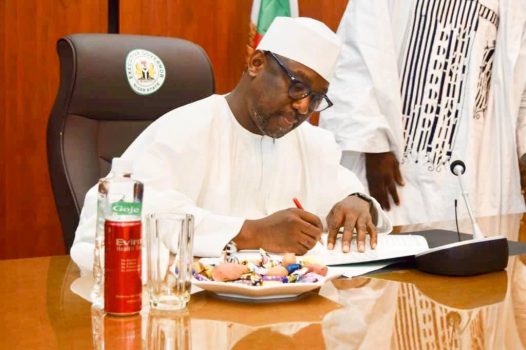 The Governor of Niger State, Alhaji Abubakar Sani Bello has invited the Economic and Financial Crimes Commission (EFCC) to the state to probe the $181 million Islamic Development Bank (IDP) loan initiated by the immediate past administration of Dr. Muazu Babangida Aliyu.

Aliyu had about two weeks ago personally raised an alarm over the loan, accusing the present administration of squandering the loan he canvassed for at the tail end of his administration.

The former Governor while presenting candidates of the Peoples Democratic Party (PDP) during the flagging off campaign for the upcoming state local government election  called on the present state government to explain how it spent the $181 million loan which he said was not released till he left office.

Aliyu alleged that the loan which was meant for the dualization of the Minna-Bida Road was eventually released by the bank and collected by the present administration.

He wondered why the government in power did not utilize the money for the purpose it was meant for, urging people of the state to demand explanation about the loan.

“I went to Jeddah in the Kingdom of Saudi Arabia to seek an interest-free loan to dualize the Minna-Bida Road but by the time the money came, I had left office in 2015.

“However, during the official flag-off of the 2019 local government council election campaign in Minna yesterday, Governor Sani Bello declared that none of such money had entered into the coffers of government,” Aliyu said.

Officially reacting to the accusation on Wednesday, Governor Bello said he will invite the anti-graft agency to the state to determine if the money had actually been collected since the road it was meant to be used for is still in a deplorable.

“We did not meet any money in government account when we came into office, neither has there been any money of such received by the government.

“For this, we are inviting the EFCC to come and probe this government and the other government to see who is lying among us. But I still say that we did not meet anything in the account.

“EFCC should come and find out if the money has been released from that time till now. The National and State Assemblies have approved the loan but they are yet to receive it.

“The money has not been released but if Muazu Babangida Aliyu said it has been released, EFCC should come and investigate who has taken the money,” Governor Bello said.