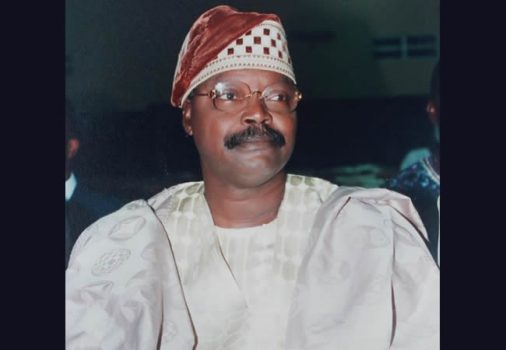 Nigeria’s former Minister of Information, Alex Opeyemi Akinyele has died at the age of 81. His son, Constantine Akinyele said the former minister died on Thursday night after a brief illness.

Akinyele, who was a public relations expert was a pioneer spokesperson of the Nigerian Customs Service (NCS) and was also a Secretary-General and later President of the Nigeria Institute of Public Relations.

Akinyele, a former Chairman of the National Sports Commission (NSC) and a member of the Constituent Assembly earned a degree in English Language from then University of Ife (now Obafemi Awolowo University).

Reacting to the news of Akinyele’s death, President Muhammadu Buhari through a statement by his media aide, Mr. Femi Adesina sympathized with the family of the deceased administrator.

“The President commiserates with the government and people of Ondo State,  friends and professional colleagues of the departed, urging them to take solace in the lasting legacies of the former colourful minister who also served as Chairman of National Sports Commission and Chairman of National Reconciliation Committee.

“As a trained teacher and public relations specialist, President Buhari affirms that Chief Akinyele’s scrupulousness, discipline and diligence were always obvious to those who worked closely with him and his love for the nation, which was zealously demonstrated through providing exemplary leadership.

“The President prays that the Almighty God will grant the soul of the former minister eternal rest, and comfort all members of his family,” the press statement read.