Scroll to Top
Follow
Home » General » U.S Secretary Of State In Senegal As Part Of His Africa Tour 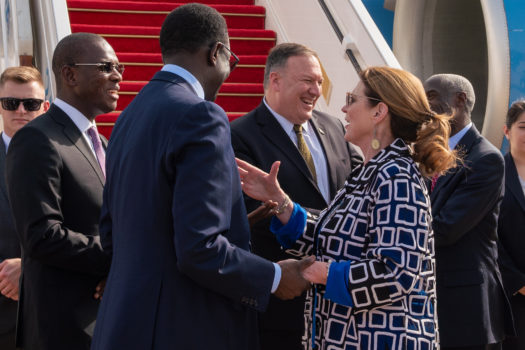 US Secretary of State Mike Pompeo is currently in Senegal to  seek out a positive vision for US cooperation with Africa.

Pompeo arrived in the Senegalese capital, Dakar on Saturday with his wife, Suzan as part of his first visit to sub-Saharan Africa in his nearly two years in office.

In addition to trade and investment, discussions with Senegalese President Macky Sall will also focus on security in the sub-region after the Pentagon announced this week that it was considering withdrawing its troops from Africa.

Mike Pompeo is expected to sign five agreements with the Senegalese authorities, meet with stakeholders of the private sector and address young people.

Pompeo’s visit is part of measures to deepen cooperation between Dakar and Washington. After Senegal, the US Secretary of State will travel to Angola and then to Ethiopia where he will complete his five-day African tour.