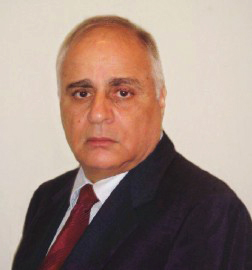 Mr. Chaim Zach is an international investor and industrialist. For close to 30 years, he has positively impacted the Nigerian agricultural sector.  He has hugely contributed to the growth and development of that aspect of the nation’s economy.

Chaim Zach is the Founder and Managing Director of Agric International Technology & Trade (Nigeria) Ltd better known by its abbreviation of AGRITED. Founded in 1991, the company’s core farming operation is poultry breeding. It produces and distributes millions of broiler and layer day-old chicks to  commercial farms throughout Nigeria.

Agrited’s operations also include the production and supply of premix and feed additives, animal vaccines and medications and also poultry and aquaculture equipment.

Agrited offers consultancy services to livestock organisations. It also undertakes the building and management of poultry farms for interested investors.

Agrited has established international standard farms, feedmills and other facilities in Oyo, Ogun and Adamawa states.

After working briefly with the Government of Israel, he founded Target Ltd, a chemical company which produces fire retardants and extinguishing chemicals and which was based in Israel.

Between 1981 and 1983, he was Vice President of PTE Industries of Louisiana, USA. The company produced fire extinguishing chemicals, retardants and products.

Back to Israel, between 1983 and 1985, he was the General Director (Chief Executive Officer) of the City of Herzliya (a 100,000 population city along the sea shore, north of Tel Aviv with 1,300 Public sector employees).

Afterwards, Zach together with a US public company acquired Hovermarine International Ltd based in Southampton, UK. The company which produces fast surface effect passenger vessels was previously part of Vosper Group. Zach was Chairman of Hovermarine from 1986 to 1993.

In 1988, he founded Gedi Enterprises Ltd in London. The company produced and sold 23 types of fresh and matured goat cheeses in the high end market and it operated from a farmland with 700 goats in Potters Bar, North London.

In Nigeria, having established Agrited in 1991, he saw some opportunity and possibilities in construction. So, in 1996, he founded Dori Construction & Engineering Nigeria Ltd. Today, the company has acquired a reputation for high profile building construction services.

Zach is married with two children and has been honoured with the Development in Nigeria Merit Award by People & Power.