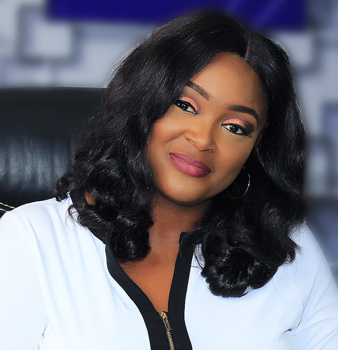 Mrs. Olajumoke Titilayo Osaji is the highly resourceful and impactful Managing Director of Effloresce Nigeria Limited. She has carved a niche for herself in the area of Branding as well as Corporate Promotional Items.

She started her career with Digiprints International Limited where she garnered over a decade of well-rounded experience in printing and advertising which adequately prepared her for her present role. Her passion for creativity and providing innovative business solutions led her to establish Effloresce. With branches in Lekki and Ikeja, Effloresce which was established in 2011 has become a household name.

An indigene of Kogi State by birth and Delta State by marriage, she was born on August 16, 1976 to the family of Retired Rear Admiral Samuel Bamidele Kolawole and Mrs. Victoria Abike Kolawole. She had her early education in Nigeria Navy Primary and Secondary schools both in Ojo, Lagos State.

She later bagged a B.Sc (Hons) degree in Industrial & Labour Relations from the former Ogun State University (now Olabisi Onabanjo University). She is a well-travelled and resourceful professional with the determination to impact not just the branding industry but the society at large.

She is a charming, humble and God-fearing woman whose love for God and the down-trodden in the society knows no bounds. Being in a male dominated industry herself, Mrs. Osaji is dedicated to empowering young women to be self-sufficient and to become agents of change themselves.

Also dear to her heart is her corporate social responsibility project which is targeted towards reducing the dropout rate among the less privileged children in the society by making available to them free of charge, some items produced and branded by her company such as uniforms, school bags, stationeries and note books which are the basic requirements needed for them to stay in school.

She is very meticulous and detailed and she is an advocate of excellence because she believes that anything worth doing at all is worth doing well.

Her hobbies are writing, singing and travelling. This amiable woman is happily married to Mr. Jude Osaji who is her greatest cheer leader. He is the Chief Executive Officer of BJO Proprieties Limited and they are blessed with four wonderful children.

It was in recognition of her accomplishments in the area of Printing and Production of Promotional Items, Shirts, Uniforms and Bags that Mrs. Olajumoke Titilayo Osaji was conferred with the Woman of Merit Gold Award which is part of the PSR National Awards in 2018.