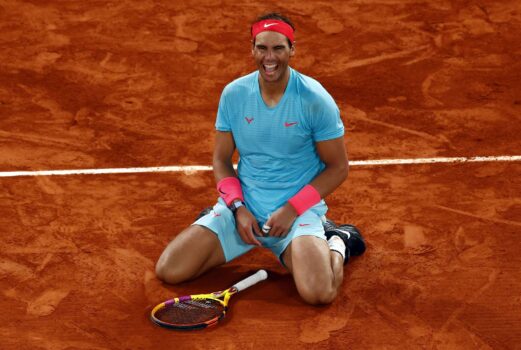 Nadal equaled long-time rival Federer for the most major singles tennis championships won by a man and added to his own record at Roland Garros with No. 13 on the red clay, courtesy of a 6-0, 6-2, 7-5 victory over the No. 1-ranked Djokovic on Sunday.

When Nadal ended it with an ace, he dropped to his knees and smiled widely.

He did not cede a set in his favorite tournament this year.

Nadal, No. 2 in the rankings, improved to 100-2 at the French Open, including a combined 26-0 in semifinals and finals, and picked up his fourth consecutive title in Paris.

“Sorry for today,” Nadal said to Djokovic in his post-victory remarks. “In Australia he killed me. It’s clear today was for me. That’s part of the game. We’ve played plenty of times together.”

Djokovic, the 2016 French Open champion, is one of only two men to beat Nadal at Roland Garros. He had beaten Nadal in their last three Grand Slam finals against one another.

Nadal is the oldest French Open champion since 1972 and the more than 15 years between his first and most recent Grand Slam titles is the longest such span for a man.