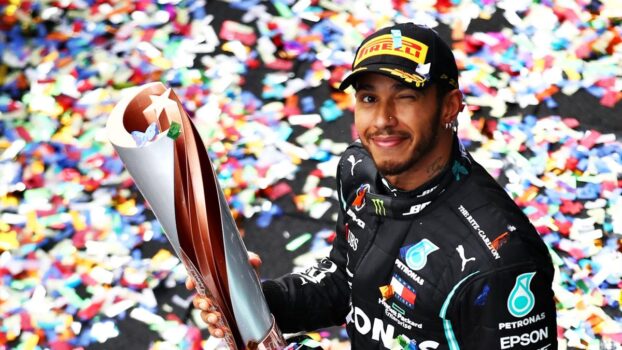 Lewis Hamilton has joined Michael Schumacher as the most successful driver in Formula One’s history.

His victory at the Turkish Grand Prix yesterday sealed the championship and his seventh title.

Hamilton only last month equalled Schumacher’s record of 92 race wins and surpassed the German icon with his victory at the Emilia-Romagna Grand Prix at Imola last time out. He now stands on 94 victories after his win in Turkey.

The 35-year-old said in his post-race interview: “Thank you. I definitely am a bit lost for words! I think naturally I have to always start with saying such a huge thank you to all the guys that are here and who are back at both the factories and all our partners for enabling us and giving us this opportunity.

“I wouldn’t be able to do this if I didn’t join this team. The journey we’ve been on has been monumental. I’m so proud of them. I want to also say a big, big thank you to team LH for sticking with me for all these years and to my family.

“We dreamed of this when we were young and when I was young when we were watching the Grand Prix. This is way, way beyond our dreams. It’s important for kids out there to see this and not to listen to anyone who tell you you can’t achieve something.

“Dream the impossible. Speak it into existence and work for it, chase it, you’ve got to never give up and never doubt yourself.”

He added: “Today we knew coming here was such a difficult weekend, we weren’t massively disappointed with our qualifying position. We knew that we were on the back foot and we did the best we could.

“Then we learned a lot. That’s what we do as a team. There’s no blame game, we hash it out and we continue to try to improve our communication so we can make moves forward.

“We don’t always get everything perfect but today, we had that small moment at the beginning of the race with the new tyres and then I couldn’t get past Seb for a while.

“I could see Albon pulling away and I thought, ‘Jesus this race is falling through my fingers.’ I just kept my head down and kept believing I would pick up pace of some sort at some stage and that’s what I did.

“There was a point where Seb was pulling away from me, I couldn’t figure out at the time what it was, I was checking my temperatures. I didn’t know if my tyres were overheating or whether they were too cold.

“But I got through the real rough phase of the graining of the tyre and then the grip started to come back and the track was drying in areas and I was improving my driving line the whole way through the race.

“I started to pick up pace then Seb pitted and for me I knew that wasn’t the right choice personally so I decided to stay out and the tyres got more and more slick, that’s exactly what I needed.

“Fortunately because they were intermediates they hold temperature so on new slicks I wouldn’t have made it round. It was the best decision.

“I remember I lost the world championship in the pitlane so I learned my lesson from 2007, that’s for sure. I felt like I really had it under control, the grip was feeling good and I was going to deal with the rain if it dropped.”