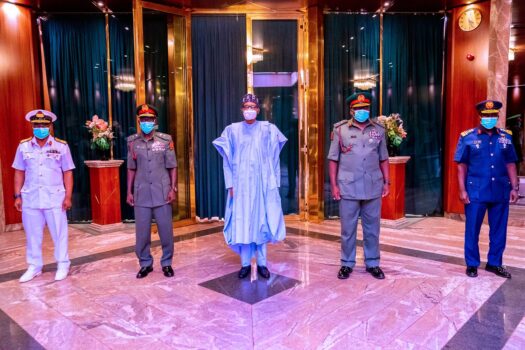 The meeting was held behind closed doors at the Council Chambers of the Presidential Villa in Abuja, the Federal capital .

In a statement by his Special Adviser on Media and Publicity, Mr Femi Adesina,  Buhari said: “We’re in a state of emergency. Be patriotic, serve the country well, as your loyalty is to the country.”

The President congratulated the Service Chiefs on heading their various services, adding: “There’s nothing I can tell you about the service because you are in it. I was also in it, and I will pray for you. I also assure you that whatever I can do as Commander-in-Chief will be done, so that the people will appreciate your efforts.