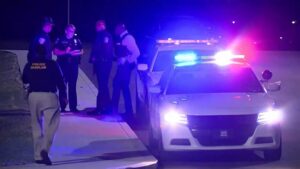 A gunman killed eight people and wounded several others before killing himself in a late-night shooting at a FedEx facility near the Indianapolis airport, police said.

Five people were hospitalized after the Thursday night shooting, according to police.

She said the gunman killed himself at the scene. A search found eight bodies, she added.

That number did not include the gunman.

The shooter wasn’t immediately identified, and investigators were in the process of conducting interviews and gathering information. Cook said it was too early to tell whether the shooter was an employee at the facility.

“We’re still trying to ascertain the exact reason and cause for this incident,” she said.

It was the latest in a recent string of mass shootings across the U.S. Last month, eight people were fatally shot at massage businesses across the Atlanta area, and 10 died in gunfire at a supermarket in Boulder, Colorado.

FedEx released a statement saying saying it is cooperating with authorities.

“We are deeply shocked and saddened by the loss of our team members following the tragic shooting at our FedEx Ground facility in Indianapolis,” the statement said. “Our most heartfelt sympathies are with all those affected by this senseless act of violence.”