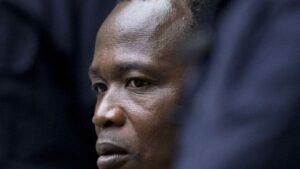 Dominic Ongwen, 45, was convicted in February on 61 counts, including forced pregnancy, which had never before been brought before the Hague-based ICC.

He was also found guilty of murder, rape, sexual slavery and conscripting child soldiers, among other charges.

Announcing the 25-year prison term on Thursday, ICC Presiding Judge Bertram Schmitt said judges had to weigh Ongwen’s brutality with his own tortured past as a schoolboy abducted by the LRA when deciding on a sentence.

“The chamber is confronted in the present case with a unique situation. It is confronted with a perpetrator who willfully brought tremendous suffering upon his victims,” Schmitt said.

“However, it is also confronted with a perpetrator who himself had previously endured extreme suffering himself at the hands of the group of which he later became a prominent member and leader.”

Prosecutors had asked for a 20-year prison term for Ongwen, saying his own history justified a lower sentence than the maximum 30 years to life allowed by the ICC.

Victims of his crimes had asked the court to impose the full life sentence, however, while the defence had sought a 10-year prison term.

Ongwen has always denied “in the name of God” all the accusations against him. He told the ICC that the LRA forced him to eat beans soaked in the blood of the first people he was forced to kill as an initiation after he was abducted.

“I am before this international court with so many charges, and yet I am the first victim of child abduction,” he said at his trial.