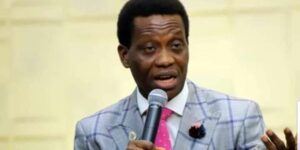 Pastor Dare Adeboye, son of the General Overseer of the Redeemed Christian Church of God (RCCG), Enoch Adeboye, is dead.

Dare Adeboye, who was a pastor of one of the branches of the church, reportedly died in his sleep on Wednesday in Eket, Akwa Ibom State.His death was confirmed by the spokesperson of the RCCG, Olaitan Olubiyi, on Thursday morning.

“It is true. The incident happened in Eket where he was based. I don’t have the details for now. Maybe before the end of today, we will issue a statement,” he was quoted to have told Punch newspaper.

He was married with children.