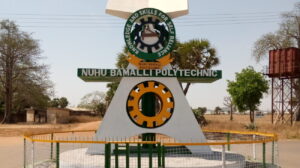 Eight students and two lecturers have been kidnapped after gunmen invaded Nuhu Bamali Polytechnic in the Zaria Local Government Area of Kaduna State.

The bandits attacked the school located along the Kaduna- Zaria road last night, shooting at students and leaving several others injured.

According to a statement issued by the publicity secretary of the Academic Staff Union of Polytechnic (ASUP) of the institution, Aliyu Kofa, one student was killed while two lecturers of the polytechnic were kidnapped by the gunmen.

Mr Kofa gave the names of the kidnapped lecturers as Habila Nasai of the General Studies department and Mal Adamu Shika of the Accounting department.

The official also mentioned that the wife of another staff, Ahmed Abdu, and two of his children were kidnapped but released on Friday morning. He did not give provide more details on the release.

“One of them, Ahmed, from the department of statistics, died in the hospital from the injuries. While the other is still receiving medical attention at the clinic.”