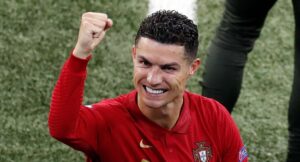 Cristiano Ronaldo’s two goals against France on Matchday 3 of UEFA EURO 2020 have taken his international total for Portugal to 109, matching the world-record mark set by former Iran forward Ali Daei.

The 36-year-old draws level with Iran’s Ali Daei and has now scored five goals at this summer’s tournament.

Ronaldo already became the all-time record scorer at the European Championship after a double against Hungary took him past France’s Michel Platini and his current tally is now up to 14.

Portugal will face the world’s top-ranked side Belgium in the first knockout round in Seville on Sunday.