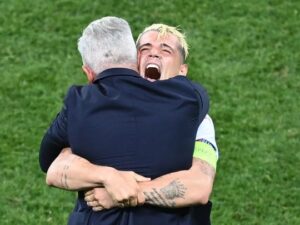 Switzerland defeated world champion France 5-4 on penalties in the last 16 of Euro 2020 on Monday as Kylian Mbappe missed the decisive spot kick in the shootout following a thrilling 3-3 draw in Bucharest.

Mario Gavranovic equalised in the 90th minute as Switzerland came from two goals down before Yann Sommer saved from Mbappe in the shootout to book Switzerland a quarter-final clash against Spain.

France looked like it was cruising after Karim Benzema’s brace and Paul Pogba’s stunning long-range strike had canceled out Seferovic’s early header, with Switzerland’s Ricardo Rodriguez missing what looked like a crucial penalty in the second half.

In the end, it mattered little as Switzerland advanced to face Spain in Friday’s quarterfinal.

After two scoreless periods of extra time, the first nine penalty takers were flawless, with Gravanović, Fabian Schär, Manuel Akanji, Ruben Vargas and Admir Mehmedi beating Lloris. Meanwhile, Pogba, Olivier Giroud, Marcus Thuram and Presnel Kimpembe scored on Sommer. Mbappé, pegged by plenty to be the star of this tournament and who had missed a golden chance in extra time, wound up delivering France’s last kick, which he missed.

“I’m sorry about this penalty. I wanted to help the team but I failed,” Mbappe wrote on Instagram.

“It’s going to be hard to sleep after this, but unfortunately these are the ups and downs of this sport that I love so much.

“The most important (thing) will be to get back up again even stronger for future commitments. Congratulations and good luck to the Swiss team.”