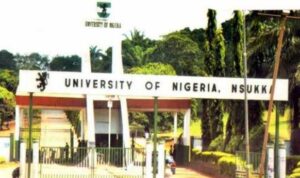 The University of Nigeria Nsukka, UNN has conferred academic degrees, diplomas and certificates as well as honorary degrees on 11,010 deserving persons found worthy in character and learning.

The graduation ceremony which was the first part of a two- day event heralded the inaugural lecture coming up tomorrow.

Declaring the ceremony open, the Chancellor of the University and Ooni of Ife, Oba Adeyeye Enitan Ogunwusi who was represented, welcomed all the graduands, their relatives, guests, staff of the university and other people to the event.

Disclosing the nature and categories of the degrees, diplomas and certificates,the Vice Chancellor, Prof Charles Igwe said : “I am happy to announce that a total of 11,010 graduands who have been found worthy in character and learning, will be awarded the first degrees and diplomas of the University of Nigeria at the 49th convocation of the university.

“A total of 408 unclassified degrees will also be awarded. (For the sake of clarity the unclassified degrees are degrees awarded to graduates of courses like Medicine and Surgery, Vertrinary Medicine, Pharmacy etc, which are not usually classified like all other degrees).The diplomas are made up of one (1) distinction, 23 credits, 39 merits and 7 passes.”

According to the VC, a total of 3497 postgraduate degrees and diplomas of the University would  also be awarded at the current convocation and they comprise 859 Doctorate degrees, 2385 Masters degrees and 253 Postgraduate diplomas.

In the post graduate cadre, there are 859 doctorates, 2385 masters  and 253 postgraduate diplomas totalling 3497 graduands. Additionally, there are four honorary doctorate degree awards to some distinguished Nigerians including Mrs Nnenna MaryAnn Obiejesi, Dr Mohamed Indimi and Engr. Anthony Uzoma Oguike, all of whom are UNN alumni.

In a message to the graduands, the Vice Chancellor congratulated and reminded them of the expectations of the society from them, pointing out that by virtue of their graduation, they have joined the elite club of graduates.”Our society is in dire need of educated men and women whose conduct will truly qualify our society as a modern and civilized one.”

The graduation ceremony was preceded by a commencement lecture which was delivered via zoom by a celebrated corporate administrator, Mrs Ibukun Awosika. Mrs Awosika is the immediate past Chairman of First Bank of Nigeria.

The graduands were later inducted through the recitation of the university’s pledge.

On behalf of the graduands, the overall best graduating student, Nwankwo Abel Nwobasi from the Department of Religion and Cultural Studies, expressed gratitude to the university authorities as well as their parents who made their education and graduation possible . He said he and his peers were  well equipped to transform the Nigerian society.