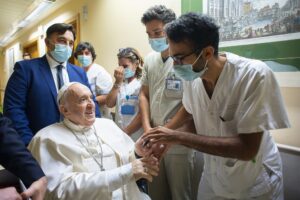 Pope Francis has been seen leaving hospital in Rome, 10 days after undergoing surgery to remove half his colon.

A car carrying the 84-year-old was spotted leaving Gemelli Polytechnic hospital in the Italian capital on Wednesday morning.

The Vatican has said that the surgery on July 4 was a scheduled operation. But the unexpected announcement that the 84-year-old pope had been hospitalized alarmed many because of the seriousness of the surgery and the Vatican’s history of obfuscation when it comes to the health of pontiffs.

Matteo Bruni, a Vatican spokesman, said that Francis had been discharged from Rome’s Gemelli hospital mid-morning, and before returning to the Vatican, he took a detour to the Basilica of St. Mary Major, where he regularly goes after trips abroad.

At the basilica, before a venerated icon of the Virgin Mary, the pope “expressed his gratitude for the success of his surgery and offered a prayer for all the sick, especially those he had met during his stay in hospital,” Mr. Bruni said in a statement.

It was the first time that Francis has faced a significant health issue during his eight-year papacy. Apart from recurrent episodes of sciatica, a nerve condition that causes back, hip and leg pain, and the odd cold, the pope has rarely missed scheduled events.