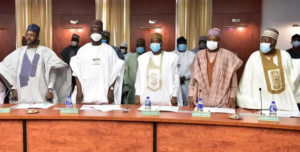 The Northern Governors’ Forum and traditional rulers from the region are holding an emergency meeting in Kaduna State.

It was learnt that the meeting is to discuss issues relating to the Value Added Tax (VAT), insecurity and economic problems confronting the region.

The meeting, which is taking place at the Executive Council Chamber of the Kaduna State Government House, is chaired by the Governor of Plateau State, Simon Lalong.

Those in attendance include the governors of Katsina, Sokoto, Kaduna, Borno, Nasarawa, Jigawa and Gombe.

The governors of Niger, Kogi, Benue, Niger, Zamfara and Taraba states are represented by their deputies.

Also present are the Sultan of Sokoto and the Chairman of Northern Traditional Rulers Council, Abubakar Saad.

The Shehu of Borno, the Emir of Zazzau, Nuhu Bamali, Estu Nupe, Emir of Kano and other royal fathers are also attending the meeting.