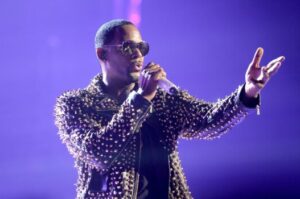 Singer R. Kelly has been found guilty of exploiting his superstar status to run a scheme to sexually abuse women and children over two decades.

Eleven accusers – nine women and two men – took the stand over the six-week trial to describe sexual humiliation and violence at his hands.

After two days of deliberation, the jury found the US star guilty on all nine charges he was facing.

Sentencing is due on 4 May and he could spend the rest of his life behind bars.

The jury found Kelly, whose full name is Robert Sylvester Kelly, was the ringleader of a violent and coercive scheme that lured women and children for him to sexually abuse.

He was also found to have trafficked women between different US states.

Along with eight counts of sex trafficking, Kelly was found guilty of racketeering – a charge normally used against organised crime associations.

During the trial, prosecutors detailed how his managers, security guards and other entourage members worked to assist him in his criminal enterprise.

The verdict comes 13 years after Kelly was acquitted of child pornography charges after a trial in the state of Illinois.