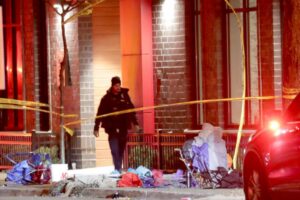 Five people were killed and more than 40 injured when an SUV sped through a Christmas parade in the small town of Waukesha, Wisconsin, on Sunday, plowing into dozens of people including young children.

Waukesha Police Chief Dan Thompson told reporters that one person was in custody and a vehicle had been recovered after the incident in the town of around 72,000 people, 20 miles (32 km) west of Milwaukee.

Police said the number of dead and injured could change.

Thompson said it was not clear whether the incident was terrorist in nature, but that there was no further danger and police had lifted an order urging people to shelter.

The police chief did not believe the SUV driver had fired a weapon following early reports of gunshots. He said that one officer had fired at the vehicle in an attempt to stop it.

The White House says it is “closely monitoring the situation” and has offered support and assistance to local officers.