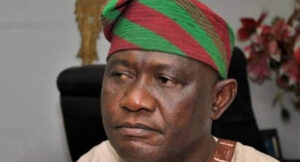 Another traditional ruler in Plateau state, Da Gyang Balak, has been kidnapped by gunmen.

Mr Gut, who is the Da Gwom Rwei of Vwang, was reportedly accosted by armed men on Sunday night while returning home in Vom, a few metres to the entrance of the National Institute for Policy and Strategic Studies (NIPSS).

He was subsequently taken away to an unknown destination and no one has caught wind of who the attackers were and if they would be making demands as has become in practice in recent times.

The spokesman for the Plateau State Police Command, Gabriel Ubah, while confirming the incident, stated that the Commissioner of Police, Bartholomew Onyeka, and senior police officers have visited the scene and mobilised security personnel to trail the abductors with instructions to rescue the paramount ruler unhurt.