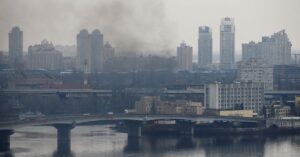 Ukraine’s president said on Thursday night that 137 people had been killed, and 316 wounded so far, after Russia launched a full scale invasion on his country by land, sea and air.

The current death toll includes both Ukrainian soldiers and civilians, according to Volodymyr Zelensky.

The blasts in Kyiv set off a second day of violence after Russian President Vladimir Putin defied Western warnings to unleash a full-scale ground invasion and air assault that quickly claimed dozens of lives and displaced at least 100,000 people.

The United States and its allies responded with a barrage of sanctions, but the Russian forces appeared intent Friday on pressing home their advantage after a string of key strategic victories on day one.

“Horrific Russian rocket strikes on Kyiv,” Ukraine Foreign Minister Dmytro Kuleba posted on Twitter after explosions were heard in the capital before dawn.

“Last time our capital experienced anything like this was in 1941 when it was attacked by Nazi Germany. Ukraine defeated that evil and will defeat this one.”