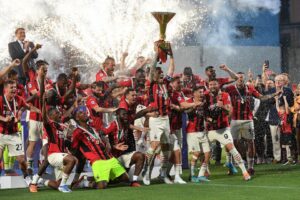 AC Milan has completed its ascent back to the Serie A summit.

For the first time since 2010-11, the Rossoneri have been crowned Italian champions, outlasting rival and defending scudetto winner Inter Milan for the ’21-22 league trophy.

It has been a humbling decade for Milan, which has seen Juventus win nine straight titles before Inter ended a lengthy title drought last season. But the red side of the San Siro is the one celebrating now, pulling even with Inter for the second-most titles in Italian history (19; both trail Juventus’s official tally of 36).

On Sunday, the final day of the Serie A season, there was never any doubt. In the 17th minute, Olivier Giroud opened the scoring with his 10th league goal of the season and it wasn’t long before he added his second in the 32nd. Four minutes later, Franck Kessié extended Milan’s lead to 3–0, securing the title for Milan.

Milan has been clinical since late January, going 16 unbeaten in the league ever since it lost to Spezia on Jan. 17 and conceding just six goals in that span.

It’s been far from a one-man show for Milan, who have been paced by attacking stars young and old. Giroud’s 11 goals, Rafael Leão’s 10 and Zlatan Ibrahimović’s eight spearheaded Stefano Pioli’s attack. Ibrahimović was part of Milan’s last title, when he took on the role of its leading scorer while on loan from Barcelona, and he came ready to celebrate after the title was clinched.

On the other end, goalkeeper Mike Maignan, who joined from French champion Lille, backstopped another club to a title by marshaling a defensive unit that ended the season level with Napoli as the league’s stingiest.