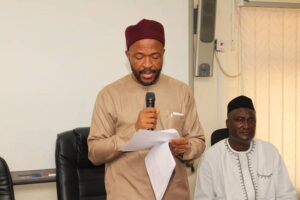 Former Minister of State for Education, Chukwuemeka Nwajiuba, and a group, Incorporated Trustees of Rights for All International, have filed an originating summons before a Federal High Court in Abuja seeking an order declaring Nwajiuba as the authentic Presidential candidate of the APC.

The plaintiffs are also praying for the cancellation of the votes garnered by the Presidential candidates of the All Progressives Congress, Bola Tinubu; and the Peoples Democratic Party, Atiku Abubakar.

Nwajiuba alleged that the primary elections of the APC and PDP that produced the presidential candidates, were marred by vote-buying.

The former Minister who contested for the APC’s presidential ticket in the party’s primary election in June, asked the court to declare him as the candidate of the party by cancelling all the votes garnered by Mr Tinubu.

He also asked the court to cancel all the votes garnered by Mr Atiku of the PDP.

The case with suit number FHC/ABJ/CS/942/22 has the APC, the PDP, Mr Tinubu, Atiku, the Attorney-General of the Federation and the Independent National Electoral Commission (INEC) as defendants.

Nwajiuba, who purchased the APC presidential form for N100m, but polled only one vote at the June 8 primary, accused Tinubu of bribing delegates with dollars.