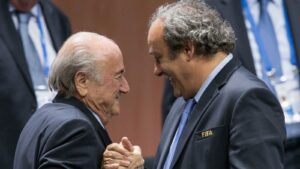 Former FIFA president Sepp Blatter and former UEFA president Michel Platini were both cleared of corruption charges by a Swiss court on Friday.

Blatter, who led FIFA for 17 years, was cleared of fraud by the Federal Criminal Court in the southern city of Bellinzona.

Prosecutors had accused Blatter, a Swiss who led FIFA for 17 years, and Platini of unlawfully arranging for FIFA to pay the Frenchman two million Swiss francs (£1.7m) in 2011.

The payment to Platini for consultancy services in Blatter’s first term as president, from 1998 to 2002, was authorised by Blatter in January 2011 but ended up finishing both men’s careers in football.

Swiss prosecutors had told the court in Bellinzona that it “was made without a legal basis” and “unlawfully enriched Platini” but the judge in their trial found them not guilty. Platini will now get back his CHF 2m.

The case meant Blatter ended his reign as FIFA president in disgrace and it wrecked Platini’s hopes of succeeding him after he was banned from football when the affair came to light.

Speaking following the verdict, Platini said: “I want to express my happiness for all my loved ones that justice has finally been done after seven years of lies and manipulation.”

He added: “My fight is a fight against injustice. I won a first game.

“In this case, there are culprits who did not appear during this trial. Let them count on me, we will meet again. Because I will not give up and I will go all the way in my quest for truth.

“Believe me, going from being a legend of world soccer to a devil is very difficult, especially when it comes to you in a totally unfair way.”