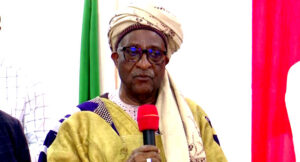 The chairman of the Board of Trustees of the Peoples Democratic Party, Walid Jibrin, has resigned from his position.

He disclosed this at the 97th BoT meeting of the party on Thursday in Abuja.

Jibrin said he was sure if he would be considered for a bigger position if Atiku Abubakar wins.

He said, “I took this decision based on what I said in the past. I said that all we want to make sure of is that Atiku Abubakar becomes the President by all means, and that is why I sincerely decided to step down from the BoT. I discussed this with the candidate and he agreed with me. I am sure if the party wins, I will be given a bigger position.”

Former President of the Senate of Nigeria, Adolphus Wabara, has since been appointed as the new BoT chairman.