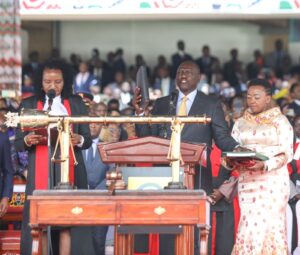 William Ruto was sworn in as Kenya’s fifth president on Tuesday, a week after the Supreme Court rejected a challenge by his defeated opponent in a close-fought election.

“A village boy has become the president of Kenya,” Ruto said at the ceremony, as the crowd erupted in cheers.

Many Kenyans wanted to witness the moment the United Democratic Alliance candidate would officially be sworn in. However, the venue could not host everyone. Scores of people were crushed and injured as they forced their way into the stadium. Most of the wounded were rushed to Nairobi’s main hospital.