Fr. Ejike Mbaka Shows His Other Side 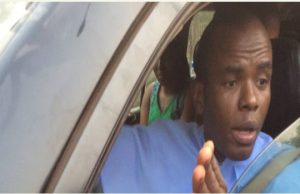 “I don’t want any distraction. Don’t distract us. Now you will go and write, ‘Mbaka this, Mbaka that’ and what I did not say. No. Please don’t write anything. Maybe after some time, you may come back and take the pictures. For now, no, don’t write anything”.

That was Nigeria’s fiery and controversial Catholic priest, Fr. Camillius Anthony Ejike Mbaka verbally charging at this reporter on Wednesday, March 9, 2016. People & Power had sought to know how he was adjusting to his much–talked–about posting from Christ the King Parish, GRA, Enugu by the Catholic Bishop of Enugu Diocese, C.V.C. Onaga.

That posting, although an in–house affair of the church, generated newspaper headlines and became something of a nationa issue. And that was because, Mbaka had walked himself into the status of a controversial priest through his predictions which got him entangled in the succession politics of the Nigerian presidency. Many Nigerians saw him as a supporter and promoter of Muhammadu Buhari’s candidature. Fr. Ejike Mbaka’s status was made worse when he recently paid a personal visit to President Buhari at the Aso Rock Villa in Abuja. In the perception of many Nigerians, the priest could just be playing politics with his prophecies.

On the other hand, a lot of  Mbaka’s followers and admirers contend that his transfer from Christ the King Parish to Queen of the Holy Rosary Parish (still within Enugu) was intended to silence his thriving and famous Adoration Ministry which pulled thousands of Nigerians to the former parish. Many saw the posting as a subtle way to punish the priest and get him out of the murky waters of the nation’s politics.

Naturally, the theatre for all the contentions, claims and counter–claims was the Nigerian media. The priest himself had been a friend of the Nigerian press. On many occassions, the media had fought on his side, particularly when it was clear that some powerful Nigerians were determined to silence him. Mbaka’s outburst when this reporter called at his Adoration Centre, Emene where construction work is still on–going, shows the other side of the priest. It clearly brought out a man who has grown publicity–weary and press–wary.

The Adoration Centre itself is planned to be the permanent site of Adoration Ministry. It is Mbaka’s dream project and when completed, it will be the gathering point for Adorers (as members of the ministry are called). It will be a permanent meeting point where the well – beloved Catholic priest will minister to multitudes. Then, Mbaka will no longer need any parish to provide him with space.

Quite a lot has changed since Fr. Mbaka was transferred to Queen of the Holy Rosary Parish. His former church, when People & Power visited, today appeared to have lost up to half of its regular congregation. The large flat–screen television sets and the mega speakers which took care of the overflow of worshippers outside the church building were no longer there. Even the church grounds seemed to testify that things had changed at Christ the King Parish, G.R.A, Enugu. Grass and tiny shrubs were visibly springing up. Hitherto, the greenry on the ground around the church was trampled to submission by the feet of congregants. The zinc sheds where the Aqua Rapha range of products owned by Mbaka’s Ministry were sold now had no products and sellers. Shops where anyone could purchase video and audio copies of the priest’s sermons messages and music had also relocated to the Adoration Centre at Emene. The numerous food sellers, restaurants and dealers in religious products who struggled for space around the church premises were also not in sight.

Taxi and commercial motorcycle operators would easily have been some of the worst losers in the developments following Fr. Ejike Mbaka’s transfer. However, many of them have redirected their routes to the Adoration Centre at Emene which is the new centre of activity of Adoration Ministry. Even on Sundays, all roads now appear to lead to the Adoration Centre. Fr. Mbaka’s followers are obviously determined to worship with the priest wherever he could be found. Many of these followers travel from as far away as the G.R.A. where the ministry was located.

That Wednesday, it was obvious that many people who did not know about Mbaka’s redeployment and who had wanted to participate in his programmes would be seriously frustrated. One of such people was Mr. Joseph Idoko who had travelled from Ovoko near Nsukka to attend the Wednesday programme called “E No Dey Again”. He told People & Power that he did not have enough to take him to the new location at Emene and then back to Ovoko. Chief Clement Nnadi travelled to Christ the King Parish, GRA, Enugu as part of a group from Onitsha that morning. They had a bedridden relation for whom they sought healing and they believed something great would happen at “E No Dey Again.” Alas! Fr. Mbaka and Adoration Ministry were nowhere in sight. Lamented Nnadi: “We left Onitsha this morning for Enugu as first. We have never been here before. We really don’t know the way to the new site and how far it is from here. Again, our vehicle got here and refused to restart. If we take a taxi, what will happen to our car? We have a bedridden patient o.” And he concluded with a question which appeared to be on the lips of all those who visited the parish that morning: “Why did they remove the priest from here?” Nnadi and his people later left in two cabs, taking Idoko along as guide.

Fr. Mbaka was posted to Queen of the Holy Rosary Parish as the resident priest. The parish is located on four plots of land. Apart from the church itself, it accommodates the parish house which is a one – storey building. The parish house is expected to house the parish priest, his assistant as well as Fr. Mbaka. There are no empty surrounding grounds here. The vicinity is built up on three sides while the Nkwubor Road seals up the environment. That Wednesday fell within the Lenten season and church members milled around the premises re – enacting the Passion of Christ through the observance of the Stations of the Cross. The faithful were in fasting and prayer. Many worshippers here too came with the hope of catching a glimpse of the famous priest.

This reporter was to learn that Fr. Mbaka was definitely not there at the parish. “If you want to see him,” one of the congregants volunteered, “go to Adoration Centre.” So, to the Adoration Centre, this reporter headed. The first thing that greeted one at the centre was the pool of cars, obviously brought there by thousands of worshippers. In session was the healing and miracle programmes called “E No Dey Again.” In the sermon, Fr. Mbaka assured the congregation that God had remembered them and had come to bless them just as he did to the Israelites. He declared that day to be a day of remembrance and blessings and enjoined his listeners to claim it as such. The congregation responded with a thunderous “Amen!”

That day, he said he would skip the testimony session where people who had received healings and other miracles would announce them. He preferred to save them till the next programme because he had to do infants’ baptism. However, at that service, he noted rather humorously that it was a constantly changing world where nothing was permanent. “You could be here today and find yourself somewhere else tomorrow.” He then made example with his followers who live in Emene saying that in the past, they paid so much to get to the G.R.A. to attend the programmes at Christ the King Parish. Now, he said, the programmes of Adoration Ministry had been brought to their doorstep.

Earlier, at the Adoration Centre, this reporter had sought permission to photograph the place particularly, the impressive construction work that was on. He had approached one of the senior seminarians called Apah, and Apah had told him that he would need Rev. Fr. Mbaka’s direct permission to do that. “Really”, said Apah, “Father has to give permission. All the photographers you see here are registered with us. No one of them can give you a shot without authorisation.” That was what brought us to the priest, who by now, was done with the infants’ baptism and was inspecting the work on a building under construction.

At first, Fr. Mbaka asked this reporter what he intended to do with the photographs and it was explained. He then sought for his identification and his official I.D. card was tendered. Mbaka said a Vehement “No”. This reporter had to explain to him that People & Power was not after sensationalism but that he simply wanted to know how he was settling down in his new place.

Fr. Ejike Mbaka did not yield an inch. He protested: “Maybe after some time, you may come back and take the pictures…. For now, no don’t write anything. Just don’t write.”