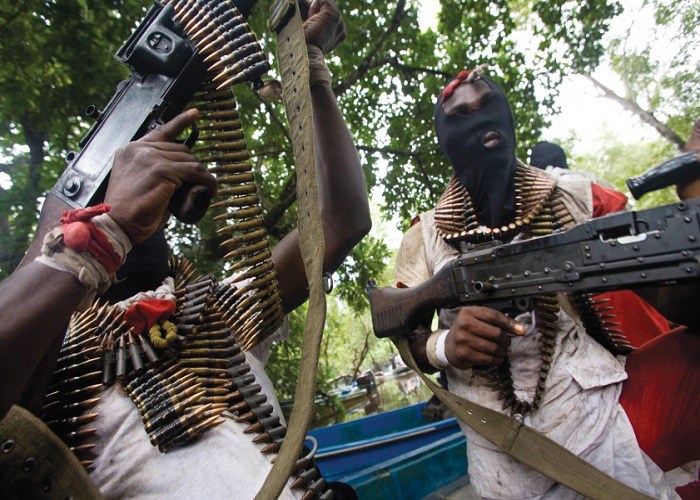 The Niger Delta Greenland Justice Movement has blown up a major oil pipeline in the upland part of Delta State. The Ogor-Oteri delivery line operated by the Nigerian Petroleum Development Company and Shorelines Petroleum was blown up at about 3 a.m. this morning.

Spokesman of the NDGJM which is an Urhobo militant group, ‘General’ Aldo Agbalaja, who issued a statement after the attack, said their action was premised on two grounds of grievance against the Federal Government.

Says the group: “When lines are blurred, justice is likely to be miscarried. If there shall be a negotiation, it must be seen and indeed, must be in actual sense, representing all individual nations of the region equally.

“The drama that trailed the visit of some Ijaw royal fathers to the Minister of State for Petroleum, Ibe Kachikwu, in Abuja recently is more reason why equity must be a factor in setting up a body that will dialogue on behalf of all the peoples of the Niger Delta.”

NDGJM further wrote: “The Niger Delta Greenland  Justice Movement will no longer sit quietly watching the endless harassment of our people in various parts of the region by the Nigerian military. We had once warned against the victimization and harassment of defenseless people of the region, especially in the creeks, but rather than heed, the Nigerian military has increased its presence and made life more difficult for our people.

“They are now killing our people on the basis of mere suspicion, this cannot continue. With the launch of their ‘Operation Crocodile Smile’, the Niger Delta Greenland Justice Mandate is also serving a notice on the commencement of our ‘Operation Crocodile Tears.’ It shall from now on be an eye for an eye; for every military atrocity carried out in the creeks and hinterland of the Niger Delta, the Nigerian armed forces will have the Niger Delta Greenland Justice Mandate to contend with.

“To this end, we are alerting all those working in the UQCC/UPS Erhomukokwarien in Ughelli, Eriemu Pigging Manifold in Agbarha, Otorogun Gas Plant, Olomoro Flow Station, Warri Refinery, Port Harcourt Refinery, Eleme, OB-OB and Obite gas plants in Omoku to evacuate because what is coming to those facilities are beyond what anybody has seen before.

“We do not want innocent blood being spilled, therefore, we advise all indigenes living in the vicinities of the facilities to relocate for the time being. The world should, however, note that the bloodbath that is about to commence in our already beaten, battered, squeezed and impoverished homeland, the Niger Delta. It is all the baby of the Nigerian government; they are the people, who are in one breath preaching resolution through dialogue and also breathing bullets and bombs on a troubled, but trusting people.

“Hold the Nigerian President responsible for the genocide that his armed forces is about to unleash on our people.”