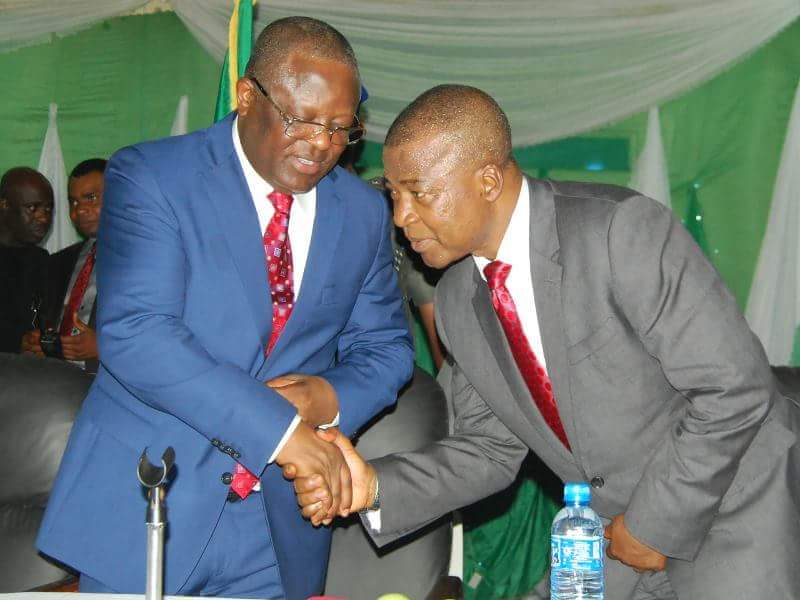 Governor of Ebonyi State, Engr. David Umahi, on Friday suspended the Commissioner for Local Government and Chieftaincy Matters/Rural Development, Barr. Samuel Okoronkwo. Although, Umahi did not clearly state the reason for his action, it was learnt it had to do with the lopsided selection of youths in the state for the Industrial Training Fund programme.

It was also gathered that Umahi, who directed that the most senior officer in the ministry should take over from Okoronkwo, later on Friday evening asked the Permanent Secretary, Ministry of Finance, Dr. Ignatius Unah, to take charge. The most senior officer in the Local Government Ministry will consequently assist the permanent secretary.
The governor, who announced the suspension while declaring open the ITF programme in Abakaliki, also disbanded the state’s Committee on Empowerment.

A statement by the Chief Press Secretary to the Governor, Emma Anya quoted Umahi as saying “The Commissioner for Local Government is hereby suspended from office effective from now. And the highest officer, a civil servant, should take over and be attending Exco until further notice.

“This administration from day one has been built on the principle of justice, equity and fairness. In most of our programmes, we do equality of Local Governments. But in this kind of empowerment, we do equality of wards, so what I expected to see here would have been for them to borrow a leaf from what we are doing to empower about 3,000 of our women and youths.

“We are doing this and everybody is happy. We are called to build Ebonyi State where nobody will say I am from North, South or Central and I think we are succeeding. Anybody that is going to take us back to the dark ages will be resisted.”

Umahi however, stressed that his administration was poised to develop the capacity of the youths to become self- reliant. He called on the youths of Ebonyi who are jobless in other parts of the country to return home and find something meaningful to do under his government’s youth-oriented programmes.
His words, “Every Ebonyi youth in other parts of the country especially Lagos should please come back home; we are ready to create jobs for them.

“A day is coming when nobody will be willing to seek political office because of the current reality. One day, there will be no kobo from the Federation Account so its high time we start thinking outside the box.” The governor said his administration would create over 100,000 jobs for the youths and women especially in the agricultural sector.
He said the state now focuses mainly on mechanised system of farming, because “agriculture without technology is death.”

Governor Umahi however promised the trainees of financial assistance to enable them set up their businesses after acquiring necessary skills from the programme. Earlier, the ITF Area Manager (Enugu and Ebonyi states), Mrs Linda Egbonu, said the programme was organised to develop the mindset of the youths in areas of entrepreneurship and skill acquisition.