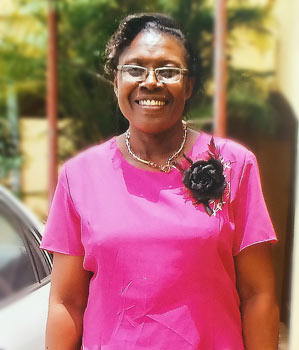 Dr Mary Umoh Thompson is a uniquely industrious physician. She is highly experienced and acknowledged in the area of radiology where she has made remarkable contributions. Since the year 2003, she has worked as Consultant Radiologist and Sonologist at the National Orthopaedic Hospital, Igbobi, Lagos. She is the current Head of the Department of Radiodiagnosis of the hospital.

Among other engagements in her field, she is also a lecturer and examiner at the Centre for Ultrasound Research and Education (Medilag Consult) of the College of Medicine, University of Lagos. Since 2005, she has done consultancy for about 16 medical diagnostic centres and hospitals in radiodiagnostics and ultrasound.

Mary, an indigene of Cross River State was born on November 11, 1958. Her primary education was at Local Authority Primary School, Ikeja. She attended Maryland Comprehensive Secondary School, Ikeja between 1970 and 1974 and then, Methodist Girls High School, Yaba, Lagos from 1974 to 1976.

She went through years of postgraduate medical education at the Post Graduate Medical College, becoming a Fellow of the West African College of Surgeons (FWACS) in 1993. Between 2001 and 2002, she studied for a Master’s degree (M.Sc.) in Anatomy at the College of Medicine, University of Lagos.

Apart from all the above, Dr Mary Umoh Thompson has certificates in various areas of clinical, academic, administrative and management studies. In 2005 for instance, she was on the UICC – sponsored ICRETT fellowship at the Karolinska University Hospital, Solna, Stockolm, Sweden. There, she went through intensive training in the treatment and diagnostic imaging of musculoskeletal and soft tissue tumours. Before that, in 2004 she did a visiting clinical programme in ultrasound at the Thomas Jefferson University Teaching Hospital in Philadelphia, USA.

She did the Middle Management Course of the Administrative Staff College of Nigeria, ASCON. She also did a one – year certificate course in French studies under the auspices of Clav Club Les Amis de Voltaire in collaboration with the National Orthopaedic Hospital, Igbobi.

Dr Mary Umoh Thompson worked at Alpha Hospital & Group of Clinics in Surulere, Lagos from 1983 to 1988. Between 1988 and 1993 she was on Residency Training in Radiology at the Department of Radiodiagnosis of the Lagos University Teaching Hospital (LUTH), Idi – Araba. She was Senior Registrar in the same department from May, 1991 to November, 1993.

Expectedly, Dr (Mrs.) Thompson has been engaged in a lot of research work. So far, she has three publications to her credit namely: (i.) The Deaf Child and Care (A Community Health Project), 1980, (ii.) The Incidence of Lumbosacral Transitional Vertebrae in Low – Back Pain Patients and (iii.) Manual of Bone and Soft Tissue Tumour of the Extremities.

She has won recognition in different areas of endeavour. In her primary and secondary school days, she won many academic prizes. She also won prizes in sports (100m Relay and High Jump). In 2007, she won the Distinguished Merit Award for her contribution to residency training at the National Orthopaedic Hospital, Igbobi. She was listed in Who’s Who in Medicine and Healthcare in 2004.

Mrs. Thompson is a fluent speaker of English, Yoruba, Efik and French. Her hobbies include reading, travelling, sewing and singing.

It is in recognition of her contribution to national development in the field of Human Medicine and Orthodox Medical Practice that Dr (Mrs.) Mary Umoh Thompson is deemed worthy to be conferred with the Woman of Merit Gold Award.