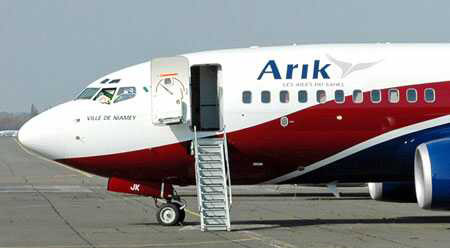 The Managing Director of the Assets Management Corporation of Nigeria (AMCON), Mr. Ahmed Kuru has revealed that the incessant flight cancellations and delays by Arik Air were due to its inability to purchase aviation fuel when it needed it.

He made the disclosure to the Senate Committee on Banking, Insurance and other Financial Institutions, headed by Senator Rafiu Ibrahim. He dismissed claims that the Federal Government was planning to make the airline a national carrier saying that the current state of the airline will be too problematic for any government to handle.

He said, contrary to other claims, the airline owes local banks at least N165 million and is indebted to AMCON to the tune of N147 billion while its foreign debt stands at a staggering $81 million necessitating its dependence on passenger fares to purchase aviation fuel.

In his response, the Committee Chairman submitted that  the take-over by AMCON  announced  by the Federal government last week, was belated. While expressing the Senate’s support for the gesture, Ibrahim noted that the airline’s  unfortunate predicament could have been averted if it had paid due attention to financial management and applied best  fiscal management practices.

In his reaction, Mr. Roy Ilegbodu, the newly appointed Chief Executive Officer of Arik Air described the state of the airline as alarming, disclosing that its performance stood at 15 percent as against 25 percent minimum required in the aviation sector.