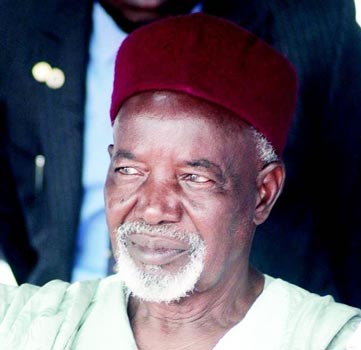 The National Chairman of the Peoples Redemption Party (PRP), Alhaji Balarabe Musa says the lofty promises made by the ruling All Progressives Congress (APC) during its campaigns has left the nation in a sorry state.

Musa, who stated this on Monday at the 54th National Executive Committee meeting of the PRP in Kaduna State said Nigerians were tired of the empty promises that have brought untold hardship upon them.

The former governor of the old Kaduna State added that instead of the APC- led government to truly fight corruption as promised during their campaigns, they were busy trampling on the democratic rights of Nigerians.

His words: “As you are all aware, our nation remains in a very sorry state despite all the lofty promises and flowery speeches made by the ruling All Progressives Congress, APC, at the inception of the administration in 2015.

“The economy remains comatose, and in some sectors, particularly in industry and commerce, it is even getting worse, monetary and fiscal management has continued to lack coherence and consistency, or even predictability and strategic planning.

“Unemployment, particularly among the youth who constitute the bulk of our population, has assumed critical proportions and is now, for all practical purposes, a national emergency.

“Yet this APC administration, which rode to power on the back of false promises to this generation of hapless young men and women, seems to have no answers to this ticking time bomb beyond slogans such as N- Power.

“In the name of an anti-corruption campaign, the government has been consistently assaulting due process and the rule of law. Court orders are flagrantly disobeyed by the very institutions that should enforce them.

“Basic democratic rights are being cynically abused. While talking glibly about fighting corruption, the government shamelessly looks askance where corruption is exposed within its very own ranks, closets and cocoons.

“APC, both at the centre and the states it controls, has proved that it has little or nothing   to provide Nigerians other than further mass impoverishment, frustration and hardship.”