US And Greek Nationals Among Nine Suspected Pirates Arrested In Nigeria 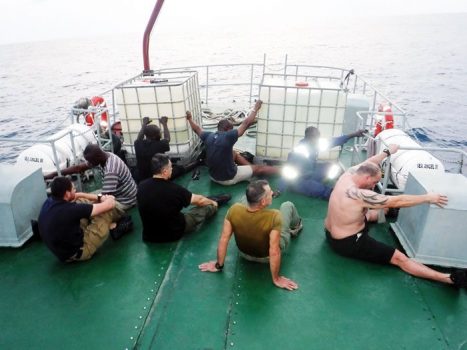 Nine suspected pirates made up of three Greek citizens, an American and five black persons have been arrested during a joint operation by the Nigerian Navy and the United States Coast Guards.

The suspects were apprehended when their vessel was stopped within Nigerian waters while the navy, under ‘Operation Junction Rain’ were patrolling the Western Naval Command area of the Gulf of Guinea.

The Tactical Commander of the operation, Commodore Dickson Olisemenogor told newsmen that further investigation to unravel others behind the illegal operations of the vessel would continue and those found culpable would be handed over to the concerned agencies for prosecution.

Commodore Olisemenogor added that another barge with 10 crew members suspected to be oil thieves was stopped and its crew members arrested during the operation.