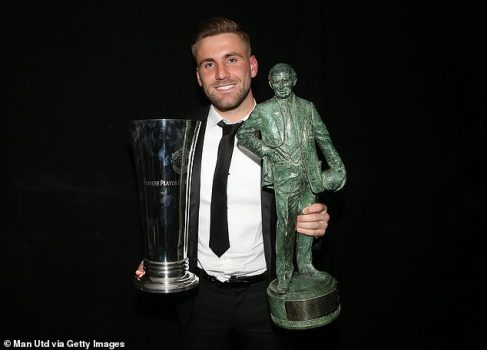 The 23-year-old Shaw enjoyed a superb start to the season and was rewarded with a five-year contract in October. He has so far started 40 times for the Red Devils in a largely injury-free campaign.

The England left-back is only the second outfield recipient of the award in the post-Sir Alex Ferguson era after Ander Herrera, who was voted Player of the Year two years ago.

“It’s obviously nice for me. But I’d rather win no trophies and have a better season as a team. It’s nice but we need to move on and focus on next season and what’s to come,” Shaw said.

He added: “I think for me personally, it’s probably been my best season since I’ve been here. I would have rather it had been a better season for the team but it wasn’t meant to be.

“Thank you to the fans for voting me for this. And from me and the team we want to, not apologize but we know it’s been a bad season. I look at the players in this team, we have amazing players.

“I know we will come back stronger. I’m very positive about next year. We all are as a team. It’s very special, especially to receive the award from the fans.

“They’ve always stuck by me and I pay that back to them by winning trophies – not trophies like this but thank you to them and that’s all I’ve got to say.

“You could see the massive difference and change when the boss came in, he lifted everyone’s spirits up. He knows deep down what this club needs and is all about.

“And at a time like that it’s what we needed. He’s done an amazing job. We’ve had ups and downs but he’s looking forward to getting us back in pre-season.”

Andreas Pereira was the surprise recipient of the Goal of the Season accolade for his curler in the 3-2 triumph over Southampton in March.