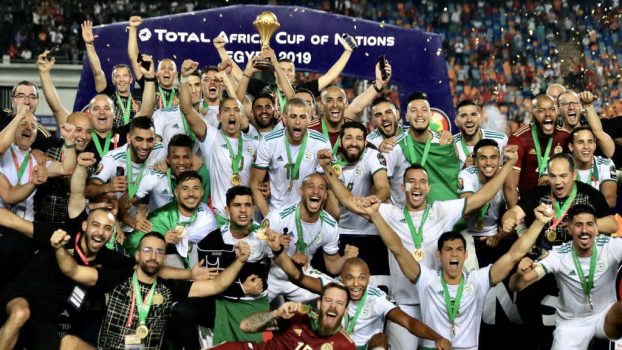 The Desert Foxes of Algeria have won the Africa Cup of Nations (AFCON)  for the second time after defeating the Teranga Lions of Senegal 1-0 in the final played at the Cairo International Stadium on Friday.

An early goal from Baghdad Bounedjah in the 2nd minute of play gave the Algerians the perfect start, to the delight of their cheering fans.

The goal spurred the Senegalese to search for the equalizer but all their efforts were truncated by the stubborn Algerian defence marshalled by Djameleddine Benlamri.

The Teranga Lions could have levelled the score in the 14th minute but for the profligacy of Cheikhou Kouyate who headed the ball wide for a goal kick.

The first half ended with both teams creating chances with little precision to do more damages.

At the resumption of the second half, Senegal was denied a penalty in the 60th minute by the Video Assistant Referee (VAR) after the centre referee, Neant Alioum from Cameroon had initially pointed to the 18-yard box over a handball by an Algerian defender.

Despite the referee’s failure to award Senegal a penalty, the team still pressed on with their game but their lack of quality finish remained their greatest undoing in the crunchy encounter.

All efforts by the Senegalese to level parity proved abortive as the Algerians held on to win the tournament which they last won on home soil in 1990.