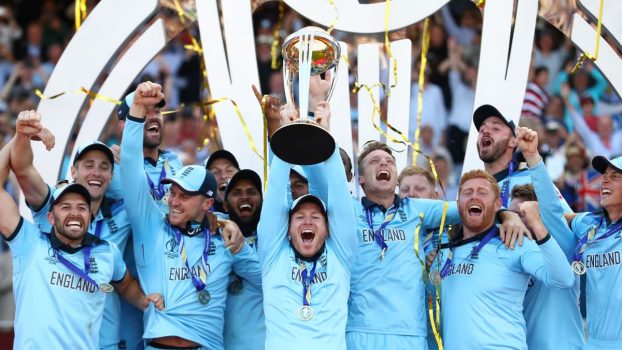 England beat New Zealand to win the men’s World Cup for the first time after one of the most amazing games of cricket ever played was tied twice.

In an emotional and electric atmosphere at Lord’s, both sides scored 241 in their 50 overs and were level on 15 when they batted for an extra over apiece, the first tie in a Cricket World Cup final.

It meant England were crowned world champions by virtue of having scored more boundary fours and sixes, 26 to New Zealand’s 17 in the entire match.

The English team required 15 from the last over of the regular match. Ben Stokes hit a six and then benefited when a throw from the deep hit his bat as he dived for ground and was inadvertently deflected for four overthrows.

Stokes could not get the two needed from the last ball as Mark Wood who was run out coming back for the second ended 84 not out and joined Jos Buttler for the super over.

The explosion of noise when England sealed victory was deafening and as the trophy was lifted, the crowd rightly sang that cricket was coming home.

“There wasn’t a lot in that game. I’d like to commiserate Kane Williamson and his team. The fight they show is worth aspiring to, the example they set is commendable to all. It was a hard, hard game where people found it hard to score.

“This has been a four-year journey, we have developed a lot. We find it hard to play on wickets like that and today was about getting over the line. Sport is tough at times.

“I was being cooled down by Liam Plunkett, which is not a good sign! I was up and down like a yo-yo,” England captain, Eoin Morgan said after the encounter.