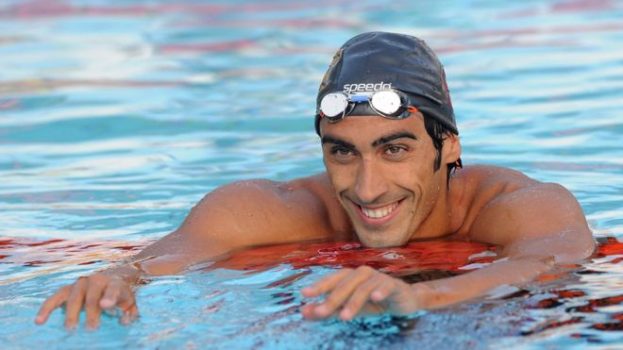 A drowning man had a stroke of luck on Monday after he was rescued by an Italian Olympic swimmer, Filippo Magnini who had been relaxing nearby.

According to local media reports, Magnini, an Olympic medal winner was with his girlfriend, Giorgia Palmas on a Sardinian beach when he heard cries for help and swung into action.

The heroic rescue happened after a man who had been floating on an inflatable off the shore of Cala Sinzias beach got into trouble.

Reports say lifeguards raced towards the incident but were beaten to it by Magnini who  quickly reached the drowning man and held him above water until the rescue boat arrived.

“I just did what I had to. The bather was in a lot of trouble. He was quite frightened, he was really stuck and had swallowed some seawater,” the retired swimmer told Italian paper, Corriere dello Sport.

“When I reached him, he wasn’t even able to speak and it wasn’t easy to lift him on to the raft so we laid him on an airbed that some other bathers had nearby,” the 37-year-old Magnini added.

A doctor later treated the man who was not in a life-threatening condition before he was taken to hospital.

Magnini twice won gold medals at the World Championships in 2005 and 2007. He was also part of the Italian 4x200m freestyle relay team which won bronze at the 2004 Athens Olympics.