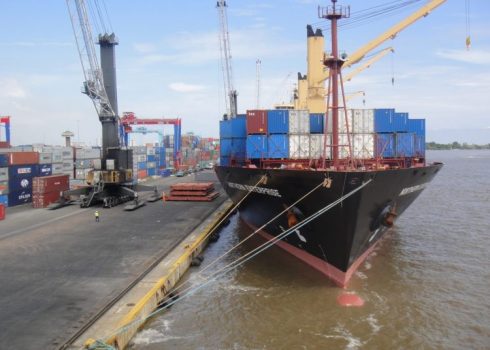 Maritime workers under the aegis of the Maritime Workers Union of Nigeria (MWUN) on Wednesday made good their threat of protesting their unpaid entitlements by the International Oil Companies (IOC) by grounding port operations.

Reports say as early as 6:00 am, the gates leading into Nigeria’s busiest ports namely Apapa and Tin Can were shut and all vehicular movement restricted.

At about 8:45 am, the seaport workers softened their stance and allowed only private vehicles into the ports, barring all container trucks from gaining access .

Speaking to Tribune Online, President General of MWUN, Comrade Adewale Adeyanju said private vehicles were only allowed into the ports because of the nature of port business.

He said: “We decided to later allow private vehicles into the ports because of the issues of emergency that could arise in the ports.

“People work inside the port and have offices there, so we have allowed them in except container-carrying trucks or any other articulated vehicle.

“The same way we have locked ports in Lagos, we have also locked all other ports across the country. No business today except the IOC’s meet our demands.”

Adeyanju had on Tuesday while addressing the press explained that the association had decided to embark on the industrial action following the failure of the IOC to settle all outstanding  entitlements to its members.