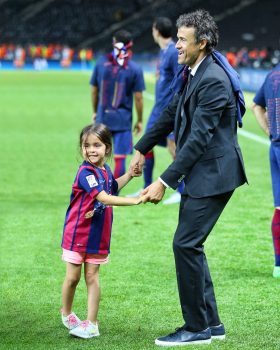 The nine-year-old daughter of former Barcelona and Spain manager, Luis Enrique has died after five intense months of battling osteosarcoma or bone cancer.

Confirming the death, the 49-year-old Enrique said his daughter, Xana will be missed and remembered by every member of his family.

In a tribute posted on Twitter, Enrique wrote: “We will miss you lots but we will remember you every day of our lives, with the hope that in the future we’ll meet each other again. You’ll be the star that guides our family. Rest dear Xana.”

Enrique, who quit as Spain’s manager in June thanked those who had sent well wishes over recent months for their ‘discretion and understanding’.

He also thanked the medical team who treated his daughter for their dedication and treatment.

Spanish Prime Minister, Pedro Sanchez was among those to pay tribute to Xana who is famously remembered for joining her father on the pitch after Barcelona beat Juventus to win the 2015 Champions League.

Sanchez wrote on Twitter: “There are no words that can go along with this pain. My heartfelt wishes to Luis Enrique and all his family, after the loss of his little Xana.”

The management of Enrique’s former club, Barcelona said it offered ‘all our sympathy’ while the club’s star player, Lionel Messi said: “We are with you… all the strength of the world.”

Spain and Manchester United goalkeeper, David de Gea said he was speechless over Xana’s demise while Spanish tennis champion, Rafael Nadal said he could not imagine the pain of the family.

Enrique, who played for Real Madrid and Barcelona during his football career, stepped down as Spain’s manager in June after 11 months in charge.

The former Spain international won the treble in his first year in charge at Barcelona as the team, led by Messi won the Spanish league, the Spanish Cup and the European Champions League after beating Juventus in the final.

Enrique led Barcelona to a league and cup double in his second season before leaving the role in June 2017.