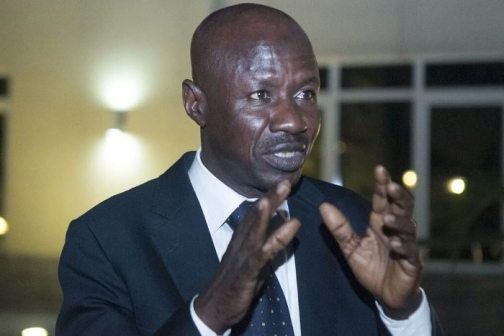 The Acting Chairman of the Economic and Financial Crimes Commission, Ibrahim Magu, was this Monday afternoon arrested by operatives of the Department of State Services (DSS).
Mr. Magu was arrested at the Wuse 11 office of the Commission where his convoy was blocked.
His arrest may not be unconnected with the reported complaint made by the Attorney-General of the Federation, Abubakar Malami (SAN)  to President Muhammadu Buhari over Magu’s conduct as head of the anti-graft agency.

Malami, who is said to have suggested to the President that Magu be replaced was said to have pointed out instances of insubordination by  the Acting Chairman as well as alleged discrepancies in the figures of questionable funds that the Commission recovered from fraud suspects.

Areas where Magu is alleged to have conducted the affairs of the commission in a suspicious manner include the sale or disposal of assets such as buildings which were recovered from corrupt politicians and erstwhile government functionaries. The disposals, according to the allegations, were done without the express approval of the Office of the Attorney-General.

The arrest of Magu this afternoon did not go without resistance. EFCC’s security details resisted the arrest of their Acting Chairman but at the end of the day, the DSS operatives prevailed and took him away.

He was also accused of disposing of assets, especially buildings seized from corrupt politicians and others, without approval, or knowledge of the AGF’s office, which is the supervisory ministry of the EFCC.