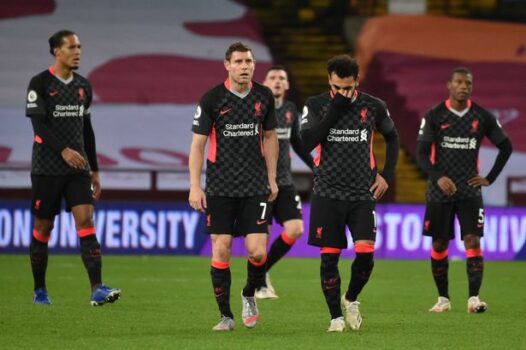 October 4, 2020 will be unforgettable in Premier league history.

Both Manchester United and Liverpool suffered historic and unbelievable defeats on the same day.

The result meant Jurgen Klopp suffered his heaviest ever managerial defeat, surpassing Man City’s 5-0 thrashing of his Liverpool side in 2017 and his Mainz team’s 6-1 loss to Werder Bremen in 2006.

It was also the first time the reigning English top-flight champions had conceded seven goals in a league match since Arsenal against Sunderland in 1953.

Manchester United were also defeated 6 -1 by Tottenham in Old  Trafford.

Bruno Fernandes had given the Red Devils a second-minute lead, before  goals from Tanguy Ndombele and Heung-min Son gave Spurs a 2 – 1 lead.

A 28th-minute red card for Anthony Martial for slapping Erik Lamela helped Tottenham’s cause as Harry Kane got on the scoresheet and Son added a fourth before half-time.

It was a perfect result for Spurs boss Jose Mourinho, who previously coached Manchester United before his sack in 2018.